Calabria (pronounced [kaˈlabrja]; in Calabrian dialect: Calabbria or Calavria, Greek: Καλαβρία), in antiquity known as Bruttium, is a region in southern Italy, south of Naples, located at the “toe” of the Italian peninsula. 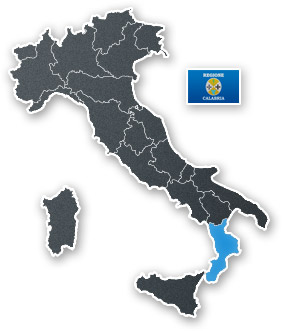 It is bounded to the north by the region of Basilicata, to the south-west by the region of Sicily, to the west by the Tyrrhenian Sea, and to the east by the Ionian Sea. The region covers 15,080 km² and has a population of 2 million. The regional capital is the city of Catanzaro. The other two main cities are Reggio Calabria and Cosenza. The demonym of Calabria is Calabrian (Italian: calabrese).